I know many contractors that prime or seal on every job, but does it always guarantee better results?

If you’ve read previous posts, you may recall I actually consider primers and sealers as different products based on the roles they perform (you can read the original priming and sealing post here). Regardless of what they’re called or how they’re used, a big question that comes into play on this topic is whether you always need to prime or seal. For me, the answer is no.

You can buy products that stick well directly to the substrate, eliminating the need for what I call a primer; you can also get well-laid slabs that aren’t porous or powdery and won’t need what I call a sealer to hold the surface together or prevent bubbles.

To take the argument against priming or sealing EVERY time a little further, I can even give you examples where it actually caused trouble rather than solved it. In one particular case I remember, the use of a sealer only managed to compromise the adhesion and cause some massive headaches for the contractor. There’s actually a lot to learn from this story and it’s worth covering in detail, so I’ll break it down for you here. 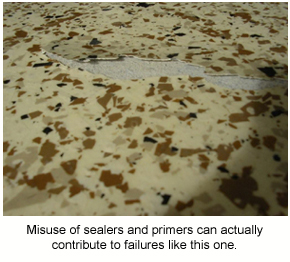 
The contractor at the heart of it all wanted to make sealing a standard step in all of his garage flake jobs so he could overcome the variation in concrete quality he was seeing and simplify the quoting process.
The solution he came up with was to apply a certain water-based epoxy (WBE) as a sealer on all the slabs. Being a very cheap product, the overall increase in material cost was minimal and far less than other sealing options - a big bonus in his view. The product manufacturer also recommended adding extra water to make it easier to apply and allow it to soak into the slab more. Fantastic! Even less cost.

Intercoat adhesion tests were conducted to prove the concept and the water-based epoxy failed concrete every time. It was fast enough and seemed to seal the surface well enough, so his plan all seemed to be falling in place.

Just when he thought he had it all worked out, a few problems began to appear. On one floor a small piece of coating let go directly beneath a rear wheel. Hot tyre pick-up, as it’s known (read more here), is a pretty common occurrence on garage floors covered with cheaper floor paint. The heat of the rubber softens these films, creating a temporary bond strong enough to prise small sections off the concrete. For two-pack epoxies, however, the heat isn’t an issue and this kind of failure can normally be traced back to surface preparation instead. When the underside of the failed coating was examined, there was a full layer of concrete visible suggesting that wasn’t the problem either. Something else was going on.

At the time it was determined to be particularly weak concrete at fault, probably due to it being rain affected or something like that. Anyway, the area was patched and life moved on.

More time passed and another failure popped up...same problem, different floor. Initially the same conclusion was reached, but maybe there was more to it? One failure wasn't enough to be concerned about and two in the space of a short time could’ve just been a coincidence, however some digging was done anyway to see if a pattern was emerging.


We understood the system worked fine on sound concrete via the adhesion tests, but when a weak slab was subject to stress (hot tyres in this case), the concrete would let go. We suspected the water-based epoxy was doing its job of sealing the slab to make it less porous, but was it somehow compromising the adhesion?

Further analysis revealed some very interesting facts. The WBE was a high solids product, but when diluted as per the instructions it would end up at 45%. Based on the coverage the contractor was getting - 1.35 litres/0.36 gallons of solids across 36m2/385ft2 floor - it meant a build of 37 microns/1.5 mils was being achieved at best, which isn’t much of a sealer at all!

In fact, very little resin was penetrating into the slab to provide the reinforcement these weak slabs needed. Because not enough was being used, it was simply sitting on the surface and forming a very flimsy basecoat of sorts that offered no extra cohesive strength to the concrete at all. Ok for good slabs, but disastrous for weak slabs. 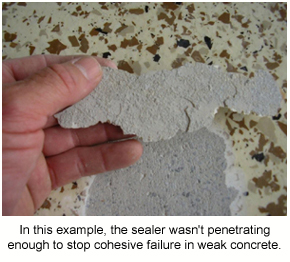 
The moral of this story is you must ensure primers or sealers are being used correctly and fulfilling their intended purpose or you could end up making the problem worse. Just putting a primer or sealer down in any old fashion definitely doesn’t guarantee better outcomes.

What is your experience with primers and sealers? Have you ever been in the situation where they were causing problems rather than solving them?


You are here:
Home › Epoxy Know How › Surface preparation - does priming and sealing guarantee better results?