Tips for avoiding mysterious lumps and bumps on epoxy floors

Contractors trying their hand at decorative flooring will know how hard it is to deliver the mirror finish clients so often expect.

Number one: you need to find a resin capable of delivering a mirror finish. Unfortunately, these don’t grow on trees. Number two: you need to avoid all the little lumps and bumps that just love to creep into the film somehow and ruin all your hard work. It can be hair-pulling stuff at times!

I’ll never forget a horrible experience I had with these tiny troublemakers many years ago. I’d just started my decorative flooring brand and worked in with a contractor to do a large garage in a ritzy part of town. The epoxy part of the metallic design looked liked glass and we were all pumped for a great result.

The original plan was to put down a single coat, but it didn’t quite work out that way. Four coats later and we still had tons of these lumps and bumps appearing out of nowhere! We tried everything. We ended up chewing through all the profit trying to fix the problem and still had to hand over a floor that was lucky to be accepted. It was right then I realised I had to figure this out once and for all or else the decorative game would eat me alive.

I’ve covered the obvious sources such as bubbles, mixing and debris in previous posts, however if mysterious lumps and bumps are still showing up on your floors, you might want to consider the following points as well.


When it comes to lumps and bumps, I’m always wary of how heavily a floor is sanded before the “money coat” is applied.

The more you sand the previous coat, the more dust you generate and the more valleys you create to trap that dust. In my experience, no matter how much I sweep, vacuum or even solvent wipe, there is very little chance of removing every single particle. The problem with having a few “harmless” specks lying around is that they can absorb resin and swell to the point where a visible lump forms – leaving you scratching your head and wondering where the hell they all came from!

For this reason I try to keep sanding as light as possible before the final coat; and, the best way to keep it light is to work within the re-coat window. For most two-pack solventless epoxies this means applying the topcoat within 24 hours so that you don’t have to hit the whole floor with a sanding machine to get good adhesion. Instead, you’re using the natural open time of the epoxy to achieve a much stronger bond and only using a pole sander beforehand to knock the top off anything that may show through. 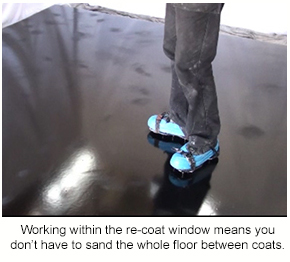 
This was the main reason for all the drama in the opening story. The fact we were putting down a PU with a dry film thickness of 40 microns on top of a virtual mirror meant we were always facing an uphill battle to keep it that way. Actually, the fresh coat looked fantastic. However, as the solvent dried and the film shrunk back to 40 microns, all of the lumps and bumps underneath were slowly (and painfully) unearthed.

I realise now the minute you apply100 microns or less of anything, the chances of seeing lumps and bumps sky rocket. In these situations, any particle left on the previous coat, or landing in the wet topcoat, has a much greater chance of being visible because the thickness of the film simply won’t cover it.

This thinking is a big part of the reason why polyurethanes are tricky to do well on smooth metallic floors. There are very few PUs that can be applied at over 100 microns and a glossy surface shows up absolutely everything, so you get no protection when it comes to the even the smallest lump or bump. In contrast, two-pack solventless epoxies are much more forgiving because many final coats in decorative applications are well over 400 microns – more than enough to swallow up all the specks that cause these headaches.

I’ve talked about using quality roller covers a lot and most recently in this post. In addition to those tips, there are a couple of things you should know –


With those points in the back of my mind, I’m always very conscious of the fact that even the best covers can still lose lint and need treatment before use. I’ve heard throwing covers into a washing machine with no detergent can take care of the loose stuff effectively, however I tend to stand by the old-fashioned approach of running tape across the cover until no more fibres are ripped off. I also tend to use cloth tape instead of masking tape for that extra stickiness.

So, there you have it. If you’ve worked hard at removing the obvious causes for lumps and bumps, yet are still seeing them mysteriously appear, it’s worth checking to see if these not-so-obvious causes are at play.


You are here:
Home › Epoxy Know How › Tips for avoiding mysterious lumps and bumps on epoxy floors