The big steps like surface preparation always hog the limelight whenever the keys to epoxy flooring are discussed, however there are many smaller ones along the way that cause just as much pain if done poorly.

One area I think falls through the cracks in this sense and continues to wreak havoc for contractors is mixing. You might find a paragraph or two tucked away in technical data sheets, but overall very little attention is paid to actually mixing the stuff and getting it out onto the floor. The way I see it, you can work as hard as you want preparing a perfect canvas, but it all amounts to nothing if you end up with lumps, clumps or soft spots in the film!

To help fill this gap, I want to run through a few pointers on what I’ve dubbed the “forgotten gear” – the equipment used when mixing solventless two-pack epoxies.


Mixing solventless two-pack epoxies isn’t like mixing up a batch of fruit-flavoured cordial/squash. They need a bit more grunt to mix thoroughly and lightly stirring with any old blade will give frustrating results at best. To do two-pack epoxies well, you really need to be using a blade designed specifically for these coatings; one that’s actually capable of working Part A and B together while reducing splashes and bubbles.

Also, the effective blending of liquids is one thing, however a good mix blade and the right approach is even more important when you start talking dispersion. What I’m getting at here is the common practice of adding fillers into a clear epoxy to create a pigmented rollcoat or self-level product.

The mistake most of us make is assuming these fillers can be easily whisked in at any stage of the mixing process. We put Part A, Part B and pigment together, give it a quick stir, then throw the filler in and expect it to disperse beautifully. Unfortunately this only leads to lumps in the film, which can range from a smattering of small, bubble-like defects, right through to large, dark clumps that are still powdery when touched.

To get the best results when adding fillers, you have to maximise the shear forces and break those lumps apart. For rollcoats and most self-levelling products, this means getting the fillers into Part A first before adding the pigment and Part B. In some rollcoats with a light loading, you might even consider using half of the Part A to disperse the fillers and add the rest in later. 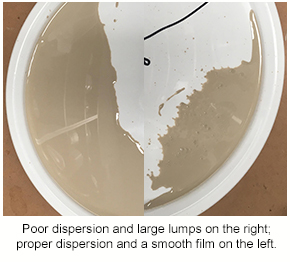 A couple of final, quick notes about fillers and lumps –


The humble mix bucket mightn’t seem like a big deal when it comes to good mixing practices – after all, a bucket is a bucket, right? Unfortunately many of us find out the hard way that buckets can cause more than a few headaches if they’re not suitable or used properly.

What do I mean by a “suitable” bucket? Basically, it boils down to size and shape. For starters, you obviously want a bucket that is big enough to handle the volume you’re mixing. This means plenty of headspace so that you can manoeuvre the blade easily and mix at high speed without splashing over the edge. You also want a bucket that isn’t too tall and narrow or short and wide for the blade because this creates problems with reach and flow.

What do I mean by a bucket being “used properly”? Mainly it’s just about swapping them out regularly. It makes sense to save money and reduce wastage by using the same mix bucket, however keep in mind that if you stop working for just 20 minutes on a hot day, a solventless two-pack epoxy can start to gel. When this happens in the bottom of a mix bucket, there’s a big danger of getting jelly-like globs on the floor.

A final quick note about buckets: if you’re mixing in plastic buckets, pay very careful attention to the condition of your mix blade. Old product left to harden can form sharp edges and tear off plastic shards that are often mistaken for a trail of small bubbles on the floor. Clean blades immediately after use and inspect regularly for sharp edges that need to be filed off.


Ok, ok, roller covers have nothing to do with mixing, however they are the final step in the wider problem I described before as “mixing the stuff and getting it out onto the floor”. Not only that, they are similar to mixing in that they continue to be the source of many defects that are avoidable with the right gear.

As we all know, the most pressing problem with roller covers is lint. When lint falls off a roller cover, it often looks like a snake-like cluster of bubbles and is often mistaken as such. When doing epoxy floors, especially high-gloss decorative floors, you simply must find a cover that protects you as much as possible from lint. You also want a cover that is durable. The forces involved in rolling out a solventless two-pack epoxy are higher, so you need covers that don’t pop their ends off or pull apart in some fashion.

Finally, the size of cover is also important. Yes, you’ll fly through a double garage with a 460mm/18” cover, but one that size will also soak up a ton of product before it even hits the floor and knock your film thicknesses out of whack.

I used and tested a lot of different roller covers over the years and eventually found one I feel hits the mark for resin flooring professionals. If you’re interested in finding out more, once again shoot me an email and I’ll happily pass on what I’ve come to know about roller covers.