Surface preparation - can I sand concrete?

Is sanding an option for preparing new concrete slabs? I guess so, but not if you want the coating to stick!

This is very much “Floor Preparation 101” and I don’t want to spend too much time on it, but I still hear of contractors using coarse sandpaper on a Polivac machine to prepare new slabs and thought I’d explain why it’s not a great idea once and for all.

(Note: For those unfamiliar with the term, Polivac is a particular brand of machines used for buffing and sanding.)

I think this bad habit can creep in when contractors come across a fresh, clean slab and underestimate the work that still needs to be done to make a coating stick. The slab might be brand new and a quick sand may seem good enough, but the problem with doing that is it fails to remove all the laitance and that means you can be headed for big trouble. The fact is sanding in this manner might only remove around 5-10% of the stuff sitting on top, which means the coating will floating on a bed of weak powder rather than anchored to a solid surface. It won’t be bonded well and will probably peel off as soon as it’s put under any stress, such as a car parked on top of it.

While preparing a new slab is generally a much easier task than a damaged, contaminated slab, you still need to do it properly. In most cases, this all boils down to laitance and getting the job done there. If you don’t, expect a call to come back and fix it! 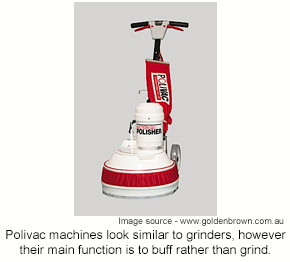 When can I use a Polivac?

While using sandpaper on a Polivac doesn’t adequately remove laitance, you can get attachments that do the job well. As I mentioned in a previous post, Decorative epoxies - the polished concrete and warehouse looks, an example of this type of thing is something called Diamabrush, which uses diamonds on flexible brushes to prepare the concrete. As discussed in that post, it’s actually a good option for decorative resin flooring because it follows the contours of the slab rather than flatten it completely and that can have a number of advantages in that field.

Like I said, this topic is well documented and I didn’t want to go too far in this particular post. I simply wanted to highlight this common problem once again and ensure that you don’t feel tempted to sand the floor. There are many ways to remove laitance, however sanding is NOT one of them.

You are here:
Home › Epoxy Know How › Surface preparation - can I sand concrete?