Selling epoxies - why should we talk volume and not weight?


Why do I prefer talking about coverages in volume and not weight as many others do?

This is only a short post, but I feel it helps clear up and very common point of confusion in the industry.


The Golden Rule of coverages


The basic laws of physics give us a very simple rule that we can use to derive coverages. I call it the Golden Rule and it goes like this: 1 litre will cover 1 square metre at 1mm thick. 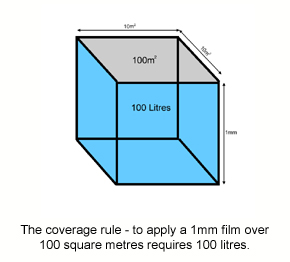 Using this rule, you can derive the coverage of a product based on a film thickness. For instance, you can work out that 1 litre applied 500 microns will cover 2 square metres, or, with a little more effort, you can turn the equation around to work out a 300-micron film applied over 45 square metres will require 13.5 litres.


Is it really cheaper?


With the simplicity and power of this rule, why do some start talking about weight when it comes to product pricing?

There might be a few answers to that, but the most obvious reason I can see is marketing. As most products have a density higher than 1, it sounds cheaper to sell based on product weight. For example, let’s say a product costs $30/litre and has a density of 1.5kg/L - if sold per kilogram it would “only” cost you $20/kg. It sounds like a bargain on the surface, but when working with actual coverages then it’s all the same at the end of the day.


There is always a “but”


A couple of points I should add on this -

For the contractors working with imperial measurements - square feet, gallons, mils etc. - I’m afraid there’s no simple coverage rule equivalent to the metric one. You’ll have to stick with the coverages that your manufacturer gives you and just keep in mind whether they are theoretical or practical.

You are here:
Home › Epoxy Know How › Selling epoxies - why should we talk volume and not weight?