Health and safety - what’s the big deal about solvents?

Being a manufacturer of solventless epoxies means I get asked about solvents a lot, so I thought I’d go over my personal opinion one more time.

While my ties to two-pack, solventless epoxies have a lot to do with their performance, I was definitely drawn to them from a health and safety viewpoint as well. Right at the start of my coating career I got badly sensitised to MDIs used in polyurethanes, and from that moment I vowed to stay away from “nasties” as much as possible. Besides MDIs, the thing I most wanted to get rid of was solvent!


There can be plenty of other bad stuff in coatings as we know, however solvents were front of the queue for me because I knew they didn’t have to be there - solventless epoxies were already being used successfully across all the coating fields. The stench was the most obvious turn-off initially, but since then I’ve found solvents have also been known to cause short-term effects such as -


And have been linked to long-term impacts on -

I come across plenty of contractors that blatantly scoff at those concerns - “I'm tough, she'll be right,” is a common attitude in our industry. Well, my response is the cemeteries are full of macho men, and you shouldn’t have to sacrifice your health for work. Others believe they're safe with organic vapour masks even though solvents are clearly more than just an inhalation issue. You can’t work in full-body suits, so what do you do? The answer for me is simple: get rid of solvents.

The logic behind going solventless, or at least minimising them where possible, only becomes clearer when you consider the people who live or work around coating projects. In my humble opinion, if you’re working indoors with a solvent-borne product then you’re downright negligent. One horrific story told to me by a father always springs to mind here. His son was helping him out on a job and mixing a solvent-borne coating in a 20-litre bucket when the vapour tracked through the building and was ignited by a cigarette smoker. The outcome was third degree burns and other life-changing injuries.

Solvent risks are not only during application or for seven days after either. Solvents can slowly be released for years (see the post on out-gassing here) and contribute to medical conditions such as Sick Building Syndrome. This illness has emerged on the back of modern building practices that aim to conserve energy by sealing up buildings as much as possible. As a result, natural ventilation suffers and, when combined with the release of chemicals in modern materials, creates a dangerously low indoor air quality.

I stumbled across an article published in The Australian Financial Review a few years ago that gave a glimpse into this problem. It claimed people spent 90% of their time indoors, in buildings that “are two to three times more concentrated [with pollutants] than outside.” Even though this was based on Australian data, I dare say many other developed countries would have similar statistics.

It also presented an example of “a woman who moved into a mass-produced project home built with materials that give off significant levels of formaldehyde (a VOC). After living in the house for 6 months, the woman went to a house-warming party in an identical but brand new home in the neighbourhood. On immediate contact with the powerful levels of formaldehyde in the new house, she collapsed. What happened was that her body had become over-sensitised to the chemical through exposure to it in her own home.”

The article concluded by quoting Green Building Council of Australia executive director Maria Atkinson, who says, “The full impact of poor indoor air quality has yet to be recognised...indoor air quality is the most serious environmental issue that has not been addressed in this country.” With solvents playing a starring role in these dramas, it seems the easy fix for everyone is to at least minimise the amount being used in the first place. 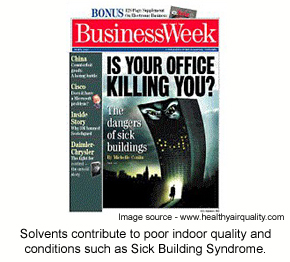 
If solvents are so bad then why do people still use them? I think the main reason why contractors, in particular, resist change is because they're worried they won't get the hang of solventless epoxies. However, having successfully introduced many epoxy users to solventless technology over the years, I’ve found it’s only a matter of time before the confidence kicks in. Yes, the products feel a little sticky to begin with, but over time this perception disappears as they realise these products actually do behave. Importantly, many contractors are astounded at the immediate health benefits they notice. If they work with solventless epoxies for a week and switch back to solvent-borne they really notice the odour, sore eyes, raw throat, headaches and solvent “high”.

As with any product, there are techniques you should learn in order to make a transition as seamless as possible. Speak to the manufacturers about the best ways to apply the product and understand the capabilities/limitations. Have a play before you take on a job and be thoroughly prepared before you start. If you do all these things then you’ll find switching over to solventless epoxies can be quite painless after all.


Want to learn more about this and related topics? We suggest the following Epoxy School courses:


You are here:
Home › Epoxy Know How › Health and safety - what’s the big deal about solvents?