Epoxy troubleshooting - what is "out-gassing"?

Have you ever had bubbles that seem to appear out of nowhere in your epoxy floor? Well, that’s NOT out-gassing!

I often hear “out-gassing” being used to describe the cause of bubbles, i.e. bubbles somehow appeared after the product was mixed and applied due to gas formation. I don’t doubt that bubbles seemingly appeared out of nowhere, however the term out-gassing has nothing to do with film defects and bubbles have nothing to do with gas. In fact, the epoxy-amine reaction doesn’t produce any gas at all. The reaction is exothermic and the heat from large volumes can generate vapour, however this is only an issue when mixed in bulk rather than spread into a thin film.

It would appear there’s some confusion out there with regards to this topic, so let’s see if we can clear a few things up.


The more common definition of out-gassing


In my experience, out-gassing is a term generally used to describe the process of volatile compounds (those that easily evaporate) migrating out of a floor over time and is therefore more of a health and safety issue than anything to do with defects. A common example of out-gassing in another context is the new car smell we all know and love. While this smell disappears over a few months, the materials in your car are still releasing these volatile compounds for a long time without you noticing it.

Thinking about an epoxy floor in the same way, there are volatile compounds that slowly move through the film and get released into atmosphere. Depending on the product they can be toxic or harmless; there can be a lot or just a little; they may all come out in the first 12 months or trickle out over a decade. There’s a great deal of variation in this sense, but the important thing to remember is it happens gradually and not within the space of 24 hours. If you can picture this then you can understand why I say out-gassing isn’t the cause of bubbles in your floor. 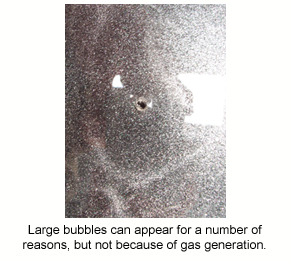 What causes the bubbles then?


Back to the original problem then: why do bubbles sometimes inexplicably appear in the floor after everything was otherwise looking fine?

One explanation is there may have been a heap of micro-bubbles you couldn’t see that joined up to form a large bubble. If that is the case, the obvious solution is to remove as many of these as possible before they get a chance to form something more visible. Unfortunately this isn’t always that easy.

Some will say that they can use spiked rollers. From my experience I’ve found spiked rollers to be effective with filled epoxy resins, e.g. a 2mm self-level floor, however not so effective with clear coats. Rather than pop the bubbles or bring them to the surface, the spikes tend to push them around instead or miss altogether. Others will tell you fine bubbles can be popped easily by putting a blow torch across the film. Not only is there doubts about the practicality of this method on large areas, it also carries safety risks and the flame can interfere with normal product behaviour.

In my opinion, a more frequent cause for the type of bubbles we’re talking about is the expansion of air in the slab. As the concrete heats up, air is forced through the pores and can be trapped in a freshly applied film. It’s the reason why I’m such a big fan of working in the afternoon when the slab is cooling rather than first thing in the morning.


How can we prevent the bubbles?


As you can probably guess, prevention is always better than cure when it comes to bubbles on a floor. Here are a few handy tips for minimising their impact -

Just for a quick review, out-gassing is the term used to describe the stuff that’s slowly given off by a floor or coating film. Bubbles aren’t caused by gas, but by air caught in the product through mixing and application or from the passing of air through the slab underneath.

You are here:
Home › Epoxy Know How › Epoxy troubleshooting - what is "out-gassing"?