What is solvent entrapment and why is it bad news for two-pack epoxy coatings?

If you thought solvent entrapment had something to do with solvent becoming trapped in a film then you’d be 100% correct. There’s nothing tricky about the name, that’s for sure! Just like anything though, knowing what it is and what it looks like is the easy part; knowing why it happens and how to avoid is where the gold really lies.

Basically, solvent entrapment can be boiled down to one thing: the solvent not having enough time to evaporate from the film before the hardening process goes too far. When applied correctly, two-pack epoxies containing solvent normally have enough time before this happens, however if they’re applied too thick or in cooler, damper conditions, the components can crosslink before the solvent escapes and this can lead to a variety of problems.

Although solvent entrapment can happen in solvent-based or water-based products, the way it affects the film is more a factor of how much solvent is used rather than the type of epoxy.

As I’ve already written in a previous post (Epoxy application - solvents and their purpose in solventless epoxies), some solventless epoxies can have a small volume of solvent added to extend pot life or drop viscosity. Despite the very low solvent content (typically 5% or less), solvent entrapment can still be an issue and tends to compromise a film in two ways -


If those are the main dangers of low-level solvent entrapment in two-pack epoxies, what happens when the solvent content is much higher, for example 70% in a solvent-borne or water-borne epoxy? In this situation, you typically see a different outcome. Rather than a small pocket of solvent permanently held captive in the film, the majority manages to gradually work its way out as the film tries to crosslink and what you end up with is a porous, sponge-like structure across widespread areas. Instead of a strong, hard film, you’re left with a much softer, weaker version that is also commonly affected by a large number of shrinkage cracks (called “mudcracking”).

It’s important to mention at this point that extra care must be taken with water-borne products and entrapment problems because of the lower volatility risk I touched on in my comments on blistering. Water will not evaporate as quickly as organic solvents and therefore these kinds of products are more prone than others. 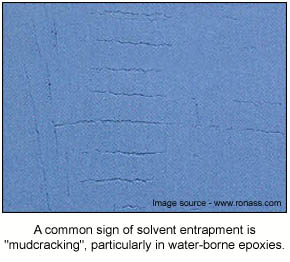 OK, so you’re probably thinking, “If I stick to applying as per the manufacturer's specification, I should not run into trouble, right?” In theory that’s correct, but sometimes it isn’t always that straightforward. For instance, what happens on a slab with minor depressions such as small gouges that exceed the allowed thickness? That’s just one scenario where you could unwittingly be heading for a problem and the only way you could avoid costly defects there is to have a good understanding of why solvent entrapment occurs in the first place.