Have you ever seen a solventless, two-pack epoxy floor coating cure hard except for a couple of soft patches, or “hot spots” as they’re sometimes called?

Do you know why something like this might happen? There are a few reasons, however one of the most common causes for mistakes like this is simply a failure to mix the coating correctly.

OK, you may have beaten the product with a drill mixer for five minutes, but unfortunately that doesn’t mean you mixed it well. The fact is you will always have areas within your bucket that do not mix well naturally - namely, the sides - and if you don’t pay attention to these then hot spots can occur.

I see and hear about it all the time; a contractor has mixed the product in a bucket and scraped the sides or left the bucket sitting upside down to get as much out as possible. There’s nothing wrong with trying to minimise losses this way, however to avoid soft epoxy patches you must be sure these regions are mixed properly as well. The only way to do this is to scrape the sides of the bucket during the mixing process to lift the stagnant product and draw it into the middle. It becomes even more important during cooler temperatures or if using a thicker product that doesn’t flow as easily. 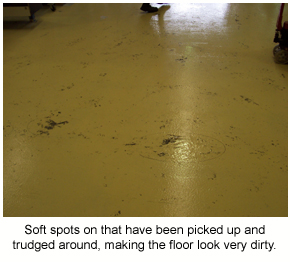 What about larger soft spots?


The hot spots created by poor mixing practices with solventless epoxies are usually small in size, so what might be the cause of larger soft spots?  If you have large soft spots, i.e. covering a full kit or more, then I would be asking questions about the mix ratio or, heaven forbid, forgetting to add the curing agent at all. Don't laugh, it does happen! If the coating was a solvent-borne or water-borne product (or even if solvent was added to a solventless product) then something called solvent entrapment might be in play and I’ll get around to that in another post.

How can I fix soft spots?

Unfortunately there are no quick fixes for soft spots. You can’t simply roll some curing agent into the mix and hope it magically hardens into the perfect film you originally intended. Instead, you have to take your medicine, so to speak, look to remove the defective film and go again. On most occasions this will involve scraping up the soft epoxy and solvent wiping away any residue. Once the solvent has evaporated you can patch the area or overcoat it. Be aware though, if you go back to bare concrete with your solvent wipe then you should patch that immediate area first before over-coating otherwise you could end up seeing it through the topcoat.