Have you ever seen a colour difference when rolling out a floor?

Let’s use a common example to illustrate the problem: you’re aiming for a simple mid-grey floor and go down the path of adding a pigment pack into a low-viscosity, clear epoxy. You’ve already rolled out the first kit and it all looks good, however when you roll out the second you notice a clearly different shade of grey along the wet edge. Ouch! The client isn’t going to like that! 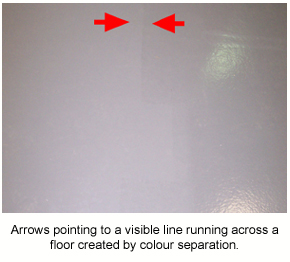 
If you don’t understand why this type of defect happens then you’re probably going to blame the epoxy pigment batch. The pigment may well be a potential source, but what you’re seeing more than likely has something to do with physics instead. Let me explain.

Using the same example, we know that grey epoxy pigment is made up of mainly white pigment with a bit of black. In the epoxy industry, the majority of white pigments are based on titanium dioxide, which is a heavy pigment with a specific gravity of around 4 (compared to water at 1). There are different forms of black, but let’s say the black in this example is a carbon black, which has a specific gravity around 2.7. Anyway, if you put them both into a low-viscosity, clear epoxy then the heavier pigment will tend to settle at a different rate to the lighter pigment and, in a nutshell, that’s what causes colour separation in these instances.


So, if we know that pigments settle at different rates, how do we control the problem? The key point to pick up on here is the epoxy pigments can only settle quickly if the resin is thin enough, i.e. it has no “body” to suspend the pigments. With that in mind, to avoid colour separation you’re far better off using a product that’s “tintable”, which means it’s designed to be used with pigments and will be specifically formulated to delay this settling from taking place.

I realise, of course, that sometimes you may not have a choice but to pigment a clear epoxy. If so, the best thing you can do is give it some body yourself by adding some filler. There are lots of different fillers to use and that’s a topic all on its own, however a kilogram or two of the right filler in an 8 litre kit will make a big difference (Note: if you’re splitting kits then adding filler will change the volume ratio). There are also other ways of adding body to a resin by using specialist thickeners, but we might go into that later.


To finish off, here are some other things you should know about epoxy colour separation -

Have you ever experienced epoxy colour separation?