I think the idea of a pigment pot is great, however you’d be surprised how many headaches I’ve seen them cause contractors over the years.

For those not familiar with pigment pots, or pigment packs as they’re also known, they are small tubs of pre-dispersed pigment stirred into suitable products to add colour. They’re very handy for both manufacturers and contractors mainly because they allow these products to be coloured as needed and, therefore, can make the task of managing stock much easier.

While they’re very handy and straight forward to use in theory, there are a few things you might want to be wary of to make sure you don’t run into any trouble.


In epoxy for solventless epoxies


If you work with solventless epoxies like I do, you really want a pigment dispersed in an epoxy resin and nothing else. Some pigments are dispersed in solvents or plasticisers, both of which might be compatible, but they can also give you grief.

Personally I don't like working with solvents for a number of reasons I've already spoken about at length, so I try to minimise their use in any shape or form. As for plasticisers, which are typically compounds called phthalates, my problem with them relates more to the fact they can stop an epoxy from fully crosslinking and this can have a negative impact on performance.


On a similar note, be aware of the actual pigments used in the pigment pot. For the contractors who value safety and eco-friendly practices, the pigment pot can be an unexpected hazard - cadmium, cobalt and, amazing as it may seem, lead-based pigments are still used by some manufacturers today.

It actually reminds me of an unfortunate instance where a contractor promoting the use of safer coatings unwittingly used pigment pots containing toxic substances  that severely compromised the green objectives of a high-profile project. Not all pigments are safe and not all pigment pots are equal, so it pays to know exactly what goes into them.


Freshly manufactured pigment pots usually mix easily enough, however over time they can have a tendency to thicken and settle, which can lead to problems like clumping. Prevention is certainly better than the cure in this case, so if you have an old pigment pot there are a few things you might want to consider before application.

Firstly, you can warm the pigment to loosen it up and get it back to more like its original viscosity for easier dispersion. Secondly, mixing the pigment pot into a fraction of Part A rather than the whole bucket can be effective because the higher concentration gives the mixer a better chance of breaking up the clumps. Finally, you might look to strain the mixed product through a fine sock to make sure the clumps are separated out before you apply. 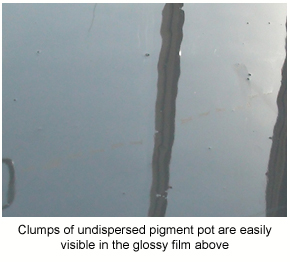 
Some manufacturers are very good with their colour consistency from batch to batch, others might not be. If possible, only use the same batch across the job to ensure that there’s no chance of inconsistency. If you can’t do that, use the same batch for each coat. If that's not possible either, you can record the weight of one pigment pot, mix as many as you need together in a separate container and re-fill each pot once again. This will blend all of the inconsistencies into a uniform colour.

To finish off, I’ve separated out and left a very common pigment pot issue to last because it’s more a factor of how they’re used rather than any problem with the pigment pots themselves. The problem I speak of is colour separation and I actually covered this topic in a previous post a while ago (read it here) so I won’t go into great detail here. Just as a quick summary, the greatest risk of experiencing colour separation occurs when putting a pigment pot into a low-viscosity, clear epoxy because the blended pigments are free to move around and settle at different rates. The best way to avoid it is to use coatings that are formulated to be tintable (rather than clear) and apply during the afternoon; both of which help restrict the mobility of these pigments.

What other pigment pot problems have you encountered?