I think one of the worst nightmares in floor coatings is inter-coat delamination, or in simple terms, one coat failing to stick to another.

Not only is there the immediate problem of removing the failed coating, but the even bigger concern of why it didn’t bond in the first place. After all, if you can’t get to the bottom of why it happened now you’ll almost certainly have a second failure on your hands!

So, what are the typical causes of inter-coat delamination with two-pack epoxy coatings and how can you prevent it from happening?


When most two-pack epoxy products cure, they form a smooth, hard film that isn’t the easiest to stick to. To get around this, manufacturers talk about applying following coats within the re-coat window - a period where the film hasn’t fully reacted yet and can therefore form strong chemical bonds with coat on top. If this re-coat window is missed, you’ll need to rely more on physical bonding by sanding the film and establishing a mechanical profile for the next coat to cling to. 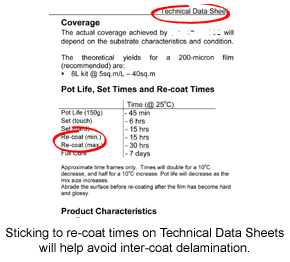 
I have already written a post on amine blushing in this blog (Epoxy troubleshooting - amine blush), so please have a read of that for a more comprehensive discussion of this problem. For now I’ll just say that the waxy film created through the blushing reaction can be a powerful barrier to epoxy adhesion.


Incompatibility can occur in several ways. For instance, some products may contain additives or modifiers that interfere with coating adhesion in general. In other cases it might be more specific, such as incompatibilities between two products or even two technologies. Some of these incompatibilities are well known, while others aren’t. For example, I’ve seen plenty of contractors caught out by using cement-based levellers under impermeable coatings and experiencing coating adhesion troubles because they didn’t allow sufficient time for drying.


This topic can get a little complicated and I’ll cover it in more detail in post shortly. Briefly, solvent entrapment can occur when another film is applied before all the solvent (organic solvents or water) in the first film has had a chance to evaporate. In this situation the solvent can become permanently trapped, which often leads to soft spots, blisters and inter-coat delamination.


Even though the period between coats is typically a matter of several hours, contamination and the impact it can have on coating adhesion is definitely still something to be wary of. Off the top of my head, I can think of a couple of instances where contamination between coats led to substantial coating adhesion problems. The first was a cool room floor in a meat processing plant that had condensation run off the walls and sneakily deposit a load of oil and fat that wreaked havoc. The second also involved oil, however this time it was a very untimely crack in a pipe that left an uncured floor completely immersed. Contamination can also, of course, be air-borne so be aware of anything that could land on the floor in between coats as well.

I’ve never personally been a part of a project where the two-pack epoxy coating came off in large sheets, however it is definitely possible because I’ve heard from contractors that have. Rest assured they didn’t have fond memories! The threat is very real and you’ve got to make sure you’re aware of the potential causes of epoxy adhesion issues to avoid such a disaster.