What is hydrostatic pressure and how is it related to moisture tolerance?

If you’re a regular visitor to this blog, you would’ve previously read about the benefits of choosing moisture tolerant epoxy hardeners when it comes to avoiding amine blush (Epoxy troubleshooting - amine blush).

But, does a moisture tolerant product mean I don’t have to be concerned by hydrostatic pressure? I’ve heard these terms creep into the same conversation many times and feel as though it could end up down a dangerous path if one starts getting confused as the answer to the other. The answer is: no, they are two different issues really.


The difference between hydrostatic pressure and moisture tolerance


Hydrostatic pressure is arguably the most complex, poorly understood of all preparation issues and a great example of why flooring can be a tough gig. Not only is the issue itself a bit of a mystery, there also seems to be vagueness around the products used to fix it, and, as we’re highlighting here, some related concepts such as moisture tolerance.

In brief, being moisture tolerant means the product doesn’t react badly to moisture during application, which is a very handy property because you typically don’t have to worry about humidity in the air etc.

Hydrostatic pressure, on the other hand, is a powerful, destructive force that acts on a coating through the movement of water or water vapour in the slab. Typically this pressure is caused by a moisture source close to the bottom of the slab, which, in the absence of an effective moisture barrier below, sees water rise through the pores in the concrete. This migration becomes a problem in a coating sense when it becomes trapped beneath an impermeable film sitting on the surface, at which point the build up of pressure can be sufficient to blow sections off or cause other forms of damage like blisters. 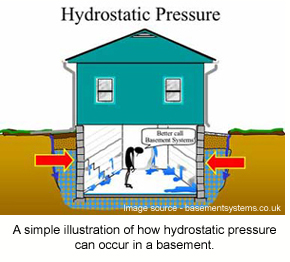 
If moisture tolerant products aren’t the answer to hydrostatic pressure, what is? Before we get into that, let’s take a look at how you can diagnose such problems in the first place. Luckily, there are a few simple tests that can be used to spot hydrostatic pressure issues before you go and put a coating down.

To start with, grinding a spot and seeing what colour it turns can be quite informative. If it starts to darken soon after, this is a classic warning sign that hydrostatic forces are at play. In this case you should also keep an eye out for efflorescence, which are visible marks that result from water coming to the surface and depositing silt-like substances as it dries.

A step up on those basic visual tests is to tape a 60cm x 60cm/2ft x 2ft plastic sheet to the concrete with duct tape and leave it for 24 hours. If water droplets appear on the underside of the plastic, or if the concrete appears darker in this area, your slab could have a problem.

For those after a more scientific approach, moisture meters can also be purchased to measure the levels at points on a slab and alert you to any potential problems. With this equipment, most people talk about 5-6% as being the maximum acceptable moisture content of concrete for flooring before hydrostatic issues are raised.

Personally, I’d never count on just one of these when assessing a slab. I’d look for multiple signs of a problem first and use that to guide my judgement on any action that needs to be taken.


If your checks all point in the same direction and you do have a hydrostatic pressure issue, there are two common ways of dealing with it - both of which look to create some form of water barrier to block it as it moves up through the slab.

Water-based epoxies are the first and probably the most common option here. These are typically 40-50% solids products that are applied onto a pre-wet slab. As the epoxy is water-based, it thins down very quickly and penetrates deeply before crosslinking to form a barrier. Other than that, there are also some colloidal silicate solutions that promote the ability to penetrate into the slab, reacting with the residual lime and cement to form a gel barrier instead.

A couple of quick side notes about these treatments -


In closing, I just wanted to make the point this post should only be taken as a broad overview to raise awareness of hydrostatic pressure and how it relates to moisture tolerance. As mentioned previously, hydrostatic pressure is a very technical, complex issue and further reading is recommended for a full understanding.