Have you ever seen a garage floor coating lift right where a car was parked?

You might not see it on all tyres; you might not even see it the first few times the car parks on the garage floor. If it does happen though, it could be a case of the dreaded hot tyre pick-up and it more than likely had something to do with a few common causes. 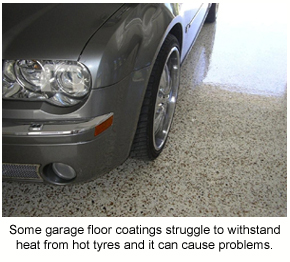 The reasons why garage floors can lift under a tyre are -

With these common reasons explained, you can probably now piece together what usually takes place in hot tyre pick-up situations.  Firstly, the garage floor coating was probably applied without properly cleaning the slab or thoroughly preparing the surface beforehand. The product used was also pretty cheap and put down by an inexperienced set of hands without closely observing all the instructions. The finish looked ok, however when it came in contact with hot tyres the heat softened the film and created a peeling stress that pulled it off once the tyres had cooled.

So there’s the typical problem in a nutshell, but how do you overcome it? In light of what I’ve said about the causes, doing the following three things would be a good start -

To finish, the best example I ever heard of hot tyre pick-up was a water-based epoxy product used in a garage that didn’t pull off in a large chunk, but rather a very neat-looking tread pattern! It was an amazing thing to see, although I doubt the owner would’ve been so thrilled!

What other classic garage floor problems have you come across?