What is epoxy “hail damage” and how is it linked to so-called Benard Cells?

The chances are you’ve already seen the effect of Benard Cells but didn’t understand what it was or how to overcome it. The effect can take on a few forms, but one of the most common is the hail damage appearance, which can leave epoxy films with lots of little dimples or dents and looking like a car that’s just driven through a nasty storm.

In very basic terms, Benard Cells are the result of the resins behaving like other liquids when it comes to convection currents - a pattern of flow that sees liquids rising as they warm and sink as they cool. As the film hardens the flow eventually stops and you can end up with an epoxy dimple in the middle of these cells, i.e. hail damage. It’s definitely not good news if you’re expecting a flat, glossy film on a high-end decorative floor! 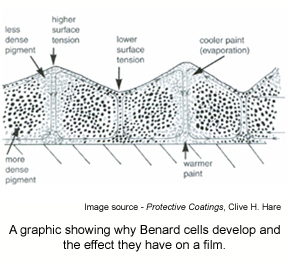 How can epoxy hail damage be stopped?

So, how can we prevent these epoxy dimples from ruining our projects?

Well, there are a few points to make about Benard Cells and epoxy hail damage that will help -

In closing, if you didn’t know about Benard Cells and when they are most likely to occur, the chances are you’d simply blame the product for misbehaving. As I hinted at before, the Benard Cell is actually responsible for several other common film defects, e.g. colour separation in pigmented films, so it’s definitely a subject worth getting on top of.

Have you ever seen epoxy hail damage? What other defects have you seen that you’d like an answer to?