I commented a few weeks back that while decorative epoxy flooring can be a thrilling field to work in, it’s actually quite demanding and holds many traps contractors need to be aware of.

In that particular post (Decorative epoxy flooring - 5 tips to make sure contractors get paid) I focussed more on the topics of client and project management; this time I want to get into more of the nitty gritty and take a look at some workmanship-related issues that provide regular headaches in the decorative flooring caper. You know what I mean, the stuff clients never miss that significantly raises the chances of a floor being rejected.

I was actually reminded just how common and damaging these defects are on a recent project when all eleven on the list I’ve compiled appeared on the one floor. That’s right, all of them! While that story is a bit of a nightmare, the good news is that all of these are very much avoidable and I’ll explain how right now. There’s actually a fair bit to go through, so I’ve split it up into two parts and I’ll follow up with another post shortly.


I’ve already covered soft spots thoroughly in a previous post (read here), however for the sake of this discussion there’s one aspect I want to highlight again. The number one source of soft spots is poorly mixed product from the sides and bottoms of buckets and it can so easily be avoided by scraping the sides during the mixing process. If you’re going to do epoxy flooring of any kind, you simply must have a good set of scrapers to help you mix properly - long enough to reach the bottom of mix buckets and at least one with a flat edge.


Crawling of an epoxy film is almost always a response to contamination, so the clear aim when talking prevention is to remove all sources and work with clean, dry surfaces at all times. When thinking about potential sources of contamination, most people know about oil, grease and silicon on the concrete itself, however not everyone thinks about other threats such as airborne dust, residue on tools or even hand wash sprays. A couple of other tips when it comes to crawling: contamination can seep through coats, so don’t assume a second coat won’t crawl, and, it may sound obvious, but don’t let anyone walk around on the floor in bare feet between coats! Oils from the skin can be enough to create troubles in the next coat.


Unless the products you use have some sort of insect repellent or toxin in them, there’s not much you can do about a few flies or moths landing in a wet film. It’s going to happen at some point. There’s a big difference, however, between dealing with a fly here or there and a full plague. To stop the latter from ruining a floor, you’ve got to be really careful sealing rooms off and doing some good common sense stuff, such as not leaving lights on overnight.


The surface preparation process leaves a lot of dust and debris on the floor and you’ve got to make sure it’s all collected before you get going with application. If you don’t then you can have all sorts of lumps and bumps that stick out like a sore thumb and can lead to other defects as well. Investing in a quality vacuum system and meticulously inspecting the floor before you start splashing resin around are the best ways of avoiding such headaches. You also need to be very wary of trudging in gunk from your mix area and applying in hard-to-reach areas, especially when cutting in. You can have a spotless concrete slab without a speck of dust on it and bring all your hard work undone by dragging out some old dirt from underneath a skirting board.


One of the defects debris can lead to is the appearance of streaks or “comets” on metallic floors. These occur when the metallic pigment gets caught and has to flow around a protrusion of some kind. Now, on some designs I personally think comets can add something to the look rather than be a fatal flaw, however not every client thinks the same way and even more so if they weren’t expecting it. To make sure you don’t get unwanted comets appearing in your metallic floors, once again you’ve got to remove all loose debris and scrape off or sand flat anything sticking out on a dried film. Comets can also be caused by lumps of metallic pigment or filler in your product, so make sure you mix well! 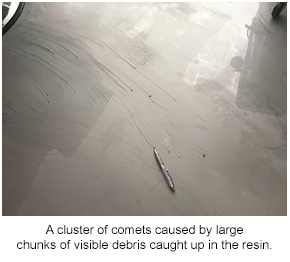 
These areas look like concentrated spheres or rings of metallic pigment and generally show up as small imperfections that can, like comets, be interpreted as defects by the client. Sinkholes, as I call them, are formed by the resin flowing into pinholes that haven’t been patched - the resin flows down into the throat while the bulkier pigment particles gather at the top. The prevention of such effects all comes down to blocking the pinholes first, which is typically done by scratching in a patching compound before the metallic coat goes down. Drips of resin off a trowel can cause a similar, perhaps more blob-like effect, which can also be viewed unfavourably if they’re only bunched in one part of the floor.

That’ll do for now I think. Like I mentioned at the start, these are unbelievably common defects that can leave many contractors on their knees, yet they’re easily eliminated from your work by doing the simple things well. Stay tuned for the second part of this post when I take a look at other widespread decorative flooring defects linked to concrete flatness, joints and even resin finding its way into unwanted places.

How To Video:
Swirling Metallic


You are here:
Home › Epoxy Know How › Epoxy troubleshooting - eleven common decorative flooring defects to watch out for - Part 1