Have you ever seen a waxy, often whitish haze form on the film of a two-pack epoxy?

The chances are it was something called amine blush, which is caused by a reaction involving the curing agent with moisture and carbon dioxide in the atmosphere.  Sometimes it can also show up as a surface oiliness or stickiness and, although it can be removed with some all-purpose soap and a stiff brush or scotchbrite pad, it’s definitely not what you want to see. 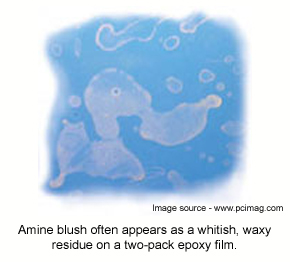 The dangers of amine blushing

Amine blushing is bad news on a couple of levels because it can interfere with numerous properties and lead to poor adhesion, poor gloss and difficulty in re-coating.

Practically speaking, amine blushing on your basecoat means you raise the risk of developing issues such as crawling in the second coat. You could also end up with large scale delamination as the amine blush essentially acts like a strong adhesion barrier across the affected surface. If, on the other hand, your topcoat develops amine blush then you’ll end up with visual defects and the surface will pick up dirt more easily from the stickiness.

How to avoid amine blushing

As noted before, amine blushing is the result of the amine in the epoxy hardener reacting with carbon dioxide and moisture. Some amines are more prone to the problem than others and, as a rule of thumb, those that aren’t soluble in water have less risk. In my own experience, I’ve found epoxy hardeners based on isophorone diamine (IPD) - a very common curing agent due to the fact it’s highly reactive, very thin and cheap - particularly susceptible to amine blushing and one to be wary of in this sense.

Obviously the conditions play a big part in whether a curing agent will blush or not as well, with cool, humid conditions the biggest concern. In this case there is plenty of moisture in the air and curing is slowed dramatically, giving the reaction plenty of time to take place. In warmer weather where the curing cycle is shortened, amine blushing tends to happen more inconsistently and I’ve seen products misbehave after going down perfectly in identical circumstances the day before.

Some other recommendations on amine blushing

To finish up, there are a few other things I’d suggest when it comes to amine blushing.

Firstly, not many people consider the carbon dioxide part of the equation when experiencing amine blushing problems. A common source for elevated carbon dioxide is the gas-fired heaters used to heat rooms and reduce curing times. If you’re using a curing agent prone to blushing then heating the room might not be an option. Secondly, the easiest way to check the blushing potential of any product is through the technical data sheet (TDS). Check the product limitations and see what the manufacturer says about humidity and temperature requirements before you use it. If in doubt, simply ask the manufacturer directly.

Most contractors that have been doing epoxy floors for a while have seen some form of amine blushing. Have you? What did you do?