I’ve been asked countless times to explain the differences among water-borne, solvent-borne and solventless epoxies and what it all means as far as their suitability for certain flooring applications.

They’re all epoxies of course, what does change is the “delivery” of the resin. For some quick definitions -


The key question is how do those basic differences impact on which one I choose?

There are all sorts of reasons why an epoxy user might choose one over the other; each type has advantages and there’s not one product for all applications. However, for concrete flooring applications this is the way I see it.


Solvent-borne epoxies are the traditional epoxy. The solvents allow the coating to apply easily in thin films and deal with any formulating problems like surface tension. Originally designed to protect steel, it was later used for concrete structures and has been adapted for flooring.

Its viscosity and relative ease of use (including long pot life) make it an adaptable type of coating where thin films are required, however the product can have some nasty aspects, e.g. solvents and solvent entrapment. Also, I don't believe 150 microns/6 mils total dry film thickness provides a long term flooring solution when the profile of concrete itself can vary just as much.


Water-borne epoxies were first used as moisture barriers to deal with hydrostatic pressure in concrete slabs. They’re characterised by a smooth, creamy texture and are effortless to roll out. Being water-soluble, they can easily penetrate into the slab pores and harden, blocking off the pores moisture travels through.

As water-borne epoxies are so nice to apply there’s a natural temptation to use them as floor coatings, but there are some inherent problems when doing so. The most pressing is the inferior film strength when compared to the other two epoxy types. Also, because water is slower to evaporate than organic solvents there’s a greater risk of solvent entrapment issues. A classic example being the thicker regions of a film created when over-coating divots; the epoxy starts to crosslink before the water can escape and leads to softer, weaker spots.

Water-borne epoxies are also considered by many as a better environmental alternative, but being water based does not necessarily mean it has less impact on the environment. That is a whole new topic that I might need to cover later! 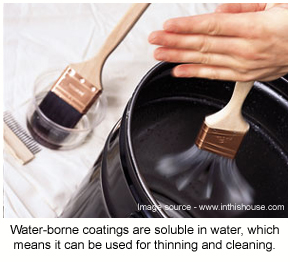 As I said before, each technology has its own advantages. For concrete flooring, I will generally only talk about two-pack solventless epoxy technology as it is the most versatile across a range of epoxy applications such as decorative, commercial, non-slip, industrial and heavy industrial.