In the epoxy flooring field especially, so many products sound similar that marketing experts are always trying to find ways to distinguish themselves from the opposition.

(Note: the reason why lots of products sound the same is there are more distributors than genuine manufacturers, but that's a topic for another time.)

For as long as they’ve have been used, the Holy Grail has been to find one that doesn’t yellow in sunlight. Plenty of formulators have tried, including myself, however we don’t seem to be there just yet. Because such a product would instantly become a best seller, manufacturers are pushing hard to cash in on whatever yellowing benefits they can offer. New terms like “low-yellowing epoxies” or “non-yellowing hardeners” have crept into promotional material and it can be quite persuasive. You can forgive a contractor for thinking, “Maybe these guys have figured it out after all!”


The real story with epoxy yellowing


In my humble opinion, most of the claims based on UV-stable epoxies aren’t very accurate for a few very good reasons - 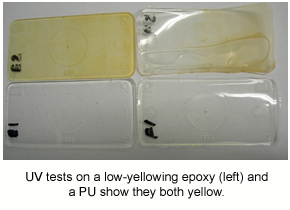 
Once again, in my opinion, until a manufacturer can make a 100% solids aliphatic version, epoxy resins will discolour and genuine low-yellowing epoxies won’t exist. I should clarify that I’m only really talking about epoxy flooring in this context. Aliphatic epoxies have been used for other applications, however formulating one suitable for the demands of flooring is proving a more elusive task.

In closing, I know some manufacturers may well be cringing as they read this post, but I prefer to tell it how it is rather than deceive people and cause problems down the track.


You are here:
Home › Epoxy Know How › Epoxy product selection - do UV-stable and low-yellowing epoxies exist?