Having worked with hundreds of epoxy contractors over the years, I’ve seen quite a large number stuck in what I’ve come to call the “epoxy contractor rut”.

This condition can present itself in a number of ways, however, just like any other rut these people share an over-riding feeling of dissatisfaction. They no longer find any excitement or reward in their epoxy work and it seems every job is a big pain in the you-know-what. They’re tired, unhappy and often unhealthy; their epoxy businesses are literally making them sick!

Peter is one such epoxy contractor I met quite a few years ago. His story always sticks in my mind not only because he was a classic example of a contractor in a rut, but because he was able to drastically turn things around and unearth the secrets to doing so at the same time.

When Peter first contacted my company he was clearly fed up with the type of work he had fallen in to - using hazardous, solvent-borne coatings on the same domestic garage floor jobs, day in and day out. He was becoming conscious of his health with headaches, sore throats and mood swings a daily battle. His motivation was also beginning to suffer, which he knew would inevitably spell trouble for his epoxy business. He obviously needed a change; a better way of doing things that would allow him to re-discover some spark and boost his well-being.

Unfortunately this kind of situation is typically not a quick fix. The problem Peter had, like many epoxy contractors, was that he had been taught HOW things were done and not WHY. The important theory needed to understand his craft and help steer his business in the right direction was sorely lacking. Because he had no one he could ask to get the answers he needed, his confidence remained low and he was never able to break out of the doldrums.

After some effort, we convinced Peter to undertake our decorative epoxy training program. While he later confessed to doing it only because of the generous discount we offered, something must have clicked inside as a change in attitude gradually became more apparent every time we dealt with him.

In the beginning, his main focus was pretty much on finding cheaper products and cheaper ways of doing floors so he could compete in the industry’s race to the bottom. On every job he would get in, get out and never look back. Over time, however, we saw a totally different Peter in operation.

No longer was domestic flake flooring the one and only string to his bow - he was now installing outstanding commercial decorative finishes and starting to branch out into the industrial field. No longer was low pricing the be all and end all - he was focussing on the greater value he could offer clients rather than simply undercutting the competition. He was even starting to feel more comfortable taking phone calls and handling the tricky questions because he continued to develop his understanding of the coatings he used. He was becoming a more complete epoxy contractor, running his own race and his confidence was sky-rocketing! 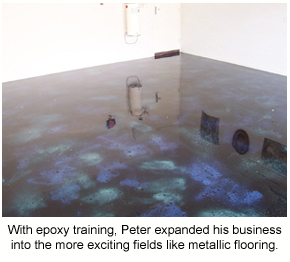 To cut a long story short, in the end Peter did what many epoxy contractors never do and successfully worked his way out of the rut. The keys for him and anyone else in his position were willingness to change and a desire to learn. By investing in epoxy education and opening his mind, he was able to learn new skills and explore new paths that could take his epoxy business in more fulfilling directions.

The wonderful thing about this story is that this kind of transformation can be achieved by anyone. It takes time and will power, but the end result can also be life changing. If you’re a contractor in a rut, I strongly believe a better future is possible if you spend some time thinking about the type of epoxy work you really want to do and the skills you need to learn in order to do it.

If you’d like to hear more on my thoughts about the contractor rut and how to escape through epoxy education, please contact me at any time.

You are here:
Home › Epoxy Know How › Epoxy application - the epoxy contractor rut