Epoxy application - solvents and their purpose in solventless epoxies

Solventless epoxy means without solvents, doesn't it? So why would I need solvents when using them?

In floor coatings, organic solvents are used to thin the resin so it applies easily and forms an even film. Some products require more than others depending on how thick the resin is to begin with and what else is added.

With solventless products, they’re formulated with a lower viscosity so they can be used without the addition of solvents. That being said, they can still play an important part in solventless epoxy application.

Solvents for epoxy clean up


Most manufacturers talk about “epoxy thinners” as a general term for solvents, however I like to be a bit more specific. When talking about solvents for epoxy clean up, I talk about two separate stages.

The first is when the product is still fresh and within working time, the other when it’s gelling. My preference for epoxy clean up in the first phase is methylated spirits (or denatured alcohol). The smell isn’t strong, it’s readily available and, most importantly, it’s not as nasty as some of the more aggressive solvents.

Once the product has entered the second phase, I look for acetone or methyl ethyl ketone (MEK) as they’re more powerful solvents than methylated spirits. There are plenty of other solvents on the market that’ll do the same job, but I tend to stay clear of options like methylene chloride and xylene because of safety concerns.

At this point it is worth stating the number one rule with respect to epoxy clean up: do not use a solvent on your skin. Yes the solvent will break down the epoxy and remove it from your skin, but breaking it down also helps your skin absorb it more efficiently, which isn’t good news. Only ever use warm, soapy water to clean epoxies off your skin. 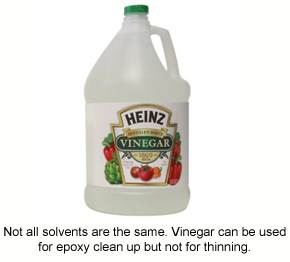 
The purpose of epoxy thinning when it comes to solventless epoxies is generally for spraying or making the product easier to roll in cooler conditions. It’s worth noting that a small amount of solvent has a big impact on a solventless product, so 2-4% by weight is typically enough and certainly no more than 10%.


Acetone and MEK belong to a group of solvents called ketones that extend pot life by blocking the crosslinking reaction with the amine. By adding a small amount in the bucket you can extend pot life dramatically and give yourself more time for application. Once the product has been rolled out, the reaction reverses and the solvent evaporates off as it normally would, which means this little trick doesn’t extend the working time as much.


Water as a solvent


Water doesn’t mix with epoxy naturally, however there are a number of ways formulators get around that to create water-borne epoxies. Most people assume these coatings are the ultimate in safety and environmental friendliness because they contain only water, however the fact is many have organic “co-solvents” to help the products flow and form a nice film. Next time you open a bucket of water-borne paint, pay attention to the smell. It’s definitely not just water in there!

Want to learn more about this and related topics? We recommend the following Epoxy School courses:


You are here:
Home › Epoxy Know How › Epoxy application - solvents and their purpose in solventless epoxies