Have you ever applied an epoxy non-slip floor that was too smooth or too coarse in areas?

Over the years I have developed and specified countless types of non-slip flooring systems. Although there are many variations, I’ve found there are five keys to successful roller-applied, non-slip epoxy flooring (aka “spread and sprinkle” non-slip flooring).

With spread and sprinkle non-slip flooring, which relies on two films to sandwich a layer of non-slip particle/aggregate, you have to keep in mind the finished floor will reflect the surface profile. If you have a divot, there will be a low spot; if you have a crack, it might show through; the hills and valleys of an undulating floor will be visible. Getting the surface flat through levelling and/or patching will give you a much better result.

You might be able to stretch films out a little further on some jobs, but this is not one of them. Higher builds are generally required for non-slip epoxy flooring because there has to be enough resin to adhere to the substrate and bind all the particles together.

I’ve found a good figure to aim for is 60% particle coverage from the two coats, with the exposed tip providing the texture and wear surface. For quality industrial epoxy non-slip flooring, personally I wouldn’t put down less than 250-300 microns/10-12 mils for the basecoat, which works well with a 30 mesh particle.

The film thickness also has to be even. Too thick and you will end up with a smooth floor; too thin and the non-slip could be too aggressive or the particles too loose - to the point where they pop out. A consistent film gives consistent non-slip flooring.

A lot of contractors use quartz or sand, which has a Mohs hardness of 6-6.5 (diamond is a 10). That’s ok for light to medium traffic, but it’ll wear quickly with trolley or forklift traffic. For a harder aggregate, choose aluminium oxide or carborundum, which have a Mohs hardness of 9.

The basecoat is chosen for a reason and substituting it can affect performance. Don’t get cheeky and swap it for a cheaper, thinner or stocked product.

My recommendation is to never use anything less than a fully saturated layer of aggregate in heavy-duty epoxy non-slip flooring applications. The most common argument for sprinkling a layer instead of fully saturating is to make it easier to clean for the client. While this is technically correct, if they're asking for such a thing then heavy-duty epoxy non-slip flooring is more than they need. Fully flooding the floor increases durability and helps produce a consistent profile. 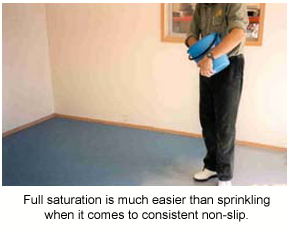 
If sprinkling is deemed the best approach, the success of the floor will be determined by how evenly the aggregate is broadcast. There are many techniques for doing this, however I find grabbing a “knuckle full” (as opposed to a hand full) and lightly tossing into the air for the particles to settle randomly on the film is the best way.


The right habits are everything!


It may sounds like a lot to remember, but it really isn't. It is just about developing the right habits from scratch. For those unfamiliar with non-slip epoxy flooring and looking for some step-by-step guidance, the Epoxy School training courses cover it in much greater depth.


So, how did my keys to success relate to the last non-slip job you completed?

How To Video:
Durable Non-slip Floors