Decorative epoxy flooring - 5 tips to make sure contractors get paid

Decorative epoxy flooring can be an exciting market to tackle, however beneath the spectacular metallic finishes lies a pretty tough gig that brings many contractors undone.

Perhaps the biggest reason why it’s so tough, in my opinion, has something to do with the lower profile of resin flooring compared to the traditional flooring options. Unlike tiles, for instance, not everyone has seen resin flooring and not everyone knows what they can reasonably expect to see at handover. In my experience this gap leads to much higher levels of expectation and a much smaller margin for error when it comes to installation.

With that in mind, epoxy contractors looking to make a decent go of the decorative game must be armed with the necessary tools. Firstly, they have to be prepared to work hard to get everyone on the same page before a project begins, and, secondly, they have to deliver on their promises when it’s time to apply.  If you don’t get those two basics right, dispute will follow dispute and the decorative epoxy flooring caper can turn very ugly.

So, how can you manage clients better and deliver on your promises? What tools do you need? Below are five tips that epoxy contractors can’t ignore if they want to get paid for the decorative epoxy floors they do.


Who is your client?


The first thing a contractor needs to understand is their client. In other words, who is the key decision maker?  Who are they trying to satisfy? Strange though it may seem, this is not always a clear-cut thing, especially when shopfitters or builders are involved. These businesses typically have their own agendas in mind – budgets, timelines and incentives – that have nothing to do with the floor owner and this can lead to all kinds of friction if not taken into account. At the start of each job, say to yourself: “Right, who is the one person that is actually making the decisions?”


A sampleboard is simply a must


As I’ve declared previously in this blog, sampleboards are the ultimate application tool yet few contractors get into the habit of doing them. In this context, they are by far the best way to make sure clients know what the floor will look like at the end of the job – colours, design, gloss, defects and everything else. You can talk about these until you’re blue in the face, but I can assure you it doesn’t sink in until they’re holding a sampleboard.


Get everything on file


Getting into the habit of documenting everything has a number of advantages for contractors over the course of a project, beginning right at the start with the quoting process. Setting up a professional proposal template that goes beyond just a price and details the full scope of the project, all the inclusions/exclusions and even your requirements to get the job done, not only presents your business in the best possible light, it also plays a key role in getting everyone onto that same page I mentioned before.

If you can’t set a template up or don’t know where to start, shoot me an email and I’d be only too happy to share mine as an example. For those wanting to take things to the next level, there are online quoting platforms such as Quotient (www.quotientapp.com) that can do everything with the click of a few buttons, including –


The idea of putting everything on file also extends to client correspondence and my mantra in this sense is to “put it in writing”. I’ve seen far too many cases where agreements or variations on a project have been made verbally and as soon as a problem arises it all unravels into a very messy blame game.

People change their minds and all sorts of things can change on a job – that’s unavoidable. A good way to protect yourself from this uncertainty is to insist that every major decision is put in writing and signed off by the key decision maker before going any further. A key document here is something called the Inspection and Test Plan. If you aren’t familiar with these, I highly recommend you do a bit of research and seriously consider adopting them for your business.


Take photos and record everything


Closely linked to the idea of putting everything in writing is another tip I’ve already pushed several times in this blog: take as many photos as possible! Take as many photos as you can before, during and after installation. Photos are not only the best way to protect yourself in the event of a dispute, they’re also the cheapest and most effective form of marketing you can get. While you’re in the recording mood, you should also be jotting down things like application time, temperature, humidity, batchcodes etc. Being able to dredge up all these details will allow you to defend yourself if a finger unfairly gets pointed your way.


With the client crystal clear on what they can expect, the responsibility now falls on the contractor to actually deliver a satisfactory floor. It’s at this point some feel the temptation to deviate from the plan by using cheaper resins to squeeze out a little more profit.  Such practice is not only very risky, but, when you look at the actual savings, it’s hardly worth doing at all. I’ll show you why.

For an average two-coat metallic floor in Australia at the moment, most epoxy contractors would be quoting somewhere around the $100/m2 mark in nice, round figures. If the floor consisted of a 300-micron basecoat and a 500-micron topcoat using a high-quality, specialist decorative resin, the material costs for those coats would work out to be say $6/m2 (basecoat) and $10/m2 (topcoat) based on current pricing.

Now, say the contractor thought they could get away with using a bottom-end product for the basecoat and only pay half as much, meaning they’d only have to shell out $3/m2 instead of the $6/m2. Not bad, you might be thinking. After all, saving 3% or thereabouts on every project will add up to something eventually! That’s true, but what happens when you consider the risk versus reward in situations like these?

Let’s imagine there was a problem with the cheaper resin and the film blushed (which isn’t uncommon). The contractor did their best to remove it the next day and applied the topcoat anyway because starting again would wipe out the small bonus they’ve tried to make. The floor looked fine initially, however the contractor returned to find the blushing had played havoc with the metallic effects and resulted in an ugly “tiger stripe” pattern like the photo below. At this point they had no option but to redo the floor, which cost another $16/m2 in materials as per the original specification, as well as the extra days of labour, travel, consumables etc. 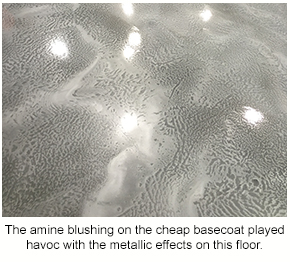 At the end of the day, you can see the contractor essentially entered a dangerous game that risked a 13% loss in materials to save only 3%. I’m not a gambling man, so for me the lesson is an obvious one: don’t penny-pinch with cheaper resins because the numbers show it just doesn’t pay off.


Want to learn more about this and related topics? We suggest the following Epoxy School courses:

How To Video:
Swirling Metallic


You are here:
Home › Epoxy Know How › Decorative epoxy flooring - 5 tips to make sure contractors get paid